The Purpose of 'Moai Statues of Easter Island' and 'Nazca Lines' 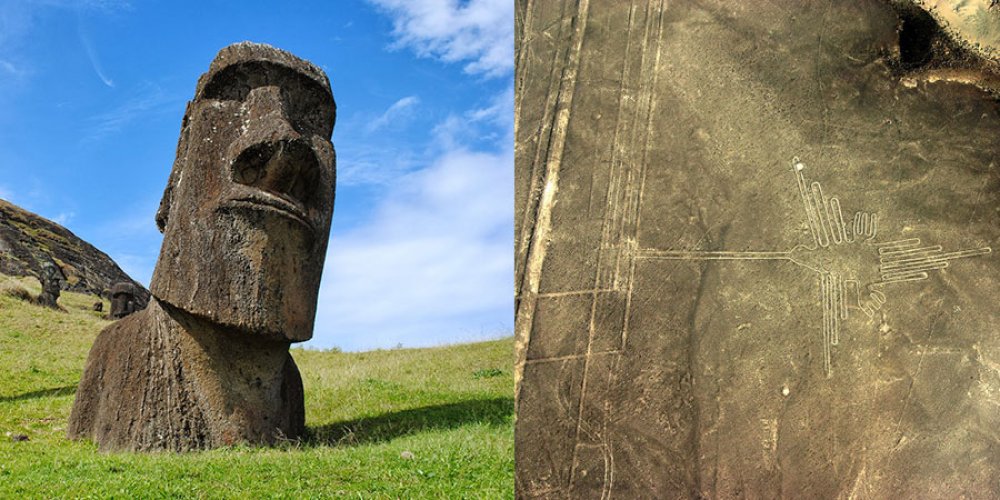 Questioner: What technique did the Orion group use to give this information?

The technique used was of two kinds:

one,
the thought transfer or what you may call “telepathy”;

Two,
the arrangement of certain stones in order to suggest strong influences of power, this being those of statues and of rock formations in your Pacific areas, as you now call them, and to an extent in your Central American regions, as you now understand them.

Questioner: Were you speaking in part of the stone heads of Easter Island?

Questioner: How would such stone heads influence the people to take the path of service to self?

Ra: I am Ra. Picture, if you will, the entities living in such a way that their mind/body/spirit complexes are at what seems to be the mercy of forces which they cannot control.

Given a charged entity such as a statue or a rock formation charged with nothing but power, it is possible for the free will of those viewing this particular structure or formation to ascribe to this power, power over those things which cannot be controlled.

This, then, has the potential for the further distortion to power over others.

Questioner: How were these stone heads constructed?

Ra: I am Ra. These were constructed by thought after a scanning of the deep mind, the trunk of mind tree, looking at the images most likely to cause the experience of awe in the viewer.

Questioner: Did the Orion entities do this themselves?

Did they do this in the physical?

Did they land, or did they do it from mental planes?

Ra: I am Ra. Nearly all of these structures and formations were constructed at a distance by thought.

A very few were created in later times in imitation of original constructs by entities upon your Earth plane/density.

Questioner: What was the approximate date in years past of the construction of these heads?

Ra: I am Ra. This approximately was 60,000 of your years in the past time/space of your continuum.

Questioner: What structures were built in South America?

Questioner: Were the lines at Nazca included in this?

Questioner: Since these can only be seen from an altitude, of what benefit were they?

Ra: I am Ra. The formations were of benefit because charged with energy of power.

These lines at Nazca are hardly understandable for an entity walking on the surface.

He cannot see anything but disruption of the surface.

However, if you go up to a high altitude you can see the patterns.

How was it of benefit to the entities walking on the surface?

Ra: I am Ra. At the remove of the amount of time/space which is now your present it is difficult to perceive that at the time/space 60,000 years ago the earth was formed in such a way as to be visibly arranged in powerful structural designs, from the vantage point of distant hills.

Questioner: In other words at that time there were hills overlooking these lines?

The entire smoothness, as you see this area now, was built up in many places in hills.

The time/space continuum has proceeded with wind and weather, as you would say, to erode to a great extent both the somewhat formidable structures of earth designed at that time and the nature of the surrounding countryside.

Questioner: I think I understand then that these lines are just the faint traces of what used to be there?

Last modified on Sunday, 21 April 2019 01:13
Tweet
More in this category: The 'Bermuda Triangle' Anomalies and Phenomenon »
Login to post comments
back to top