Ra's In-depth Analysis of Archetype 6: Transformation Of The Mind - The Lovers or Two Paths 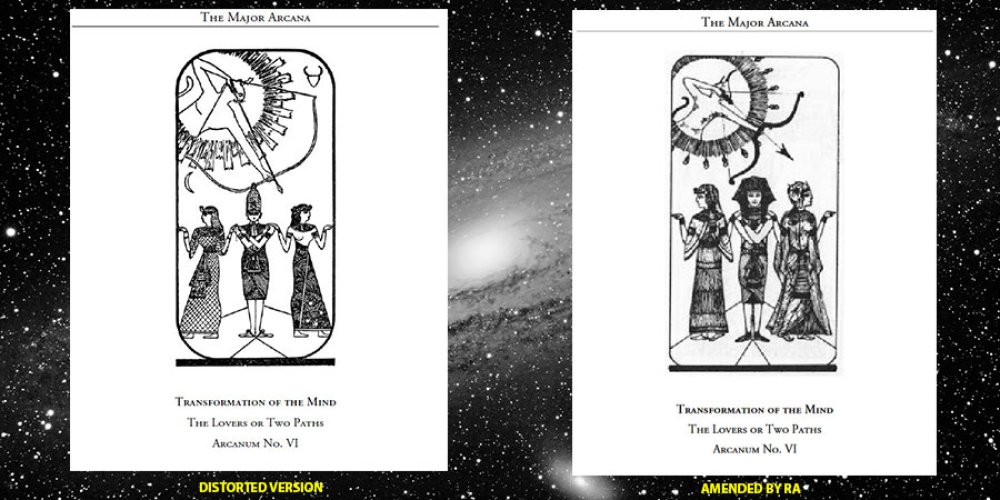 In Card Number Six I see the Transformation of the Mind, the male with crossed arms, representing transformation.

The transformation is possible either toward the left or the right-hand path.

The path is beckoned or led by the female, the Potentiator.

The creature above points an arrow at the left-hand path indicating that if this path is chosen the chips, shall we say, will fall where they may, the path being unprotected as far as the activity of catalyst.

The intellectual abilities of the chooser of the left-hand path would be the main guardian rather than the designed or built-in protection of the Logos for the right-hand path.

The entity firing the arrow seems to be a second density entity which indicates that this catalyst could be produced by a lesser evolved source, you might say.

Ra: I am Ra. We shall speak upon several aspects seriatim.

let us examine the crossed arms of the male who is to be transformed.
What, O student, do you make of the crossing?
What see you in this tangle?

There is a creative point to be found in this element which was not discussed overmuch by the questioner.

Let us now observe the evaluation of the two females.
The observation that to the left-hand path moves the roughly physical and to the right-hand path the mental has a shallow correctness.

There are deeper observations to be made concerning the relationship of the great sea of the unconscious mind to the conscious mind which may fruitfully be pursued.

Remember, O student, that these images are not literal.

They haunt rather than explicate.

Many use the trunk and roots of mind as if that portion of mind were a badly used, prostituted entity.

Then this entity gains from this great storehouse that which is rough, prostituted, and without great virtue.

Those who turn to the deep mind, seeing it in the guise of the maiden, go forth to court it.

The courtship has nothing of plunder in its semblance and may be protracted, yet the treasure gained by such careful courtship is great.

The right-hand and left-hand transformations of the mind
may be seen to differ by the attitude of the conscious mind towards its own resources as well as the resources of other-selves.

We now speak of that genie, or elemental, or mythic figure,
culturally determined, which sends the arrow to the left-hand transformation.

This arrow is not the arrow which kills but rather that which, in its own way, protects.

Those who choose separation,
that being the quality most indicative of the left-hand path, are protected from other-selves by a strength and sharpness equivalent to the degree of transformation which the mind has experienced in the negative sense.

Those upon the right-hand path
have no such protection against other-selves for upon that path the doughty seeker shall find many mirrors for reflection in each other-self it encounters.

Questioner: In the previous session you mentioned the use of the forty-five minute interval of the tape recorders as a signal for the end of the session.

Is this still the appropriate time?

Ra: I am Ra. This is, of course, at the discretion of the questioner for this instrument has some transferred energy and remains open as it has unfailingly done.

However, the fragility of the instrument has been more and more appreciated by us.

We, in the initial observations, saw the strength of will and overestimated greatly the recuperative abilities of the physical complex of this entity.

Therefore, we may say that ending a working at approximately this amount of energy expenditure; that is, some point soon following upon the sound vibration of which you speak, would be appropriate and, insofar as we may determine, may well extend the incarnational amount of your space/time which this instrument shall be able to offer to this contact.

To continue with the tarot, I would like to make the additional observation with respect to Card Number Six that with the male’s arms being crossed, if the female to his right pulls on his left hand it would turn his entire body and the same is true for the female on the left pulling on his right hand from the other side.

This is my interpretation of what is meant by the tangle of the arms.

The transformation, then, occurs by the pull which tends to turn the entity toward the left or the right-hand path.

the conscious,
exemplified by the male,

the unconscious,
exemplified by the female.

Indeed, both the prostituted and the virginal deep mind invite and await the reaching.

In this image of Transformation of Mind, then, each of the females points the way it would go, but is not able to move, nor are the two female entities striving to do so.

They are at rest.

The conscious entity holds both and will turn itself one way or the other or, potentially, backwards and forwards, rocking first one way then the other and not achieving the transformation.

In order for the Transformation of Mind to occur, one principle governing the use of the deep mind must be abandoned.

It is to be noted that the triangular shape formed by the shoulders and crossed elbows of consciousness is a shape to be associated with transformation.

Indeed, you may see this shape echoed twice more in the image, each echo having its own riches to add to the impact of this complex of concepts.

We will probably return to this card in the next session with more observations after we consider Ra’s comments.

Last modified on Monday, 16 December 2019 21:27
Tweet
More in this category: Ra's In-depth Analysis of Archetype 7: The Great Way Of The Mind - The Chariot »
Login to post comments
back to top