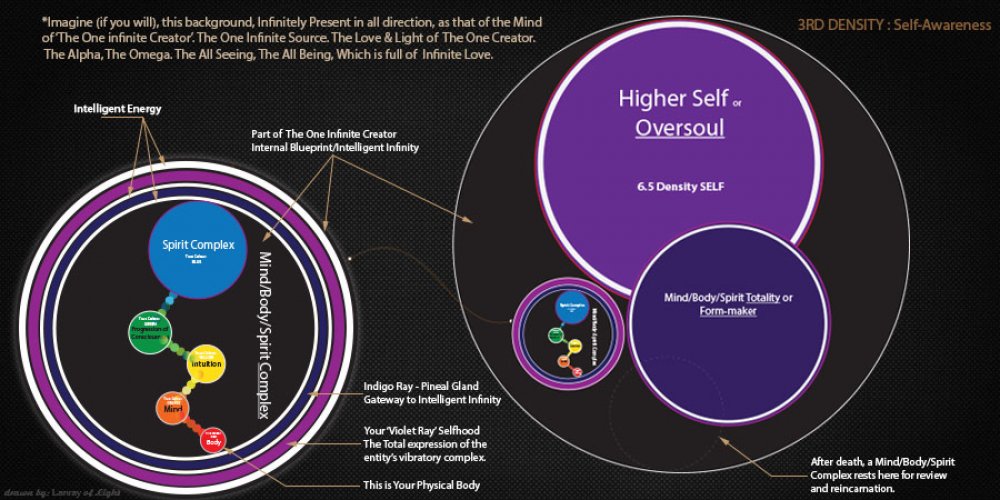 Questioner: Has a Wanderer ever been so infringed upon by a negative adept and then placed in negative time/space?

Questioner: Can you tell me the situation that the Wanderer finds himself in and the path back, why that path could not be the simple moving back into positive time/space?

Ra: I am Ra. The path back revolves,

firstly,
about the higher self’s reluctance to enter negative space/time.
This may be a significant part of the length of that path.

Secondly,
when a positively oriented entity incarnates in a thoroughly negative environment it must needs learn/teach the lessons of the love of self thus becoming one with its other-selves.

When this has been accomplished the entity may then choose to release the potential difference and change polarities.

However, the process of learning the accumulated lessons of love of self may be quite lengthy.

Also the entity, in learning these lessons, may lose much positive orientation during the process and the choice of reversing polarities may be delayed until the mid-sixth-density.

All of this is, in your way of measurement, time-consuming although the end result is well.

Questioner: Is it possible to tell me roughly how many Wanderers who have come to this planet during this master cycle have experienced this displacement into a negative time/space?

Ra: I am Ra. We can note the number of such occurrences.

There has been only one.

We cannot, due to the Law of Confusion, discuss the entity.

Questioner: You said that the higher self is reluctant to enter negative space/time. Is that correct?

Ra: I am Ra. The incarnative process involves being incarnated from time/space to space/time. This is correct.

Questioner: I will make this statement and see if I am correct.

When first moved into time/space of a negative polarization the positive entity experiences nothing but darkness.

Questioner: It would seem to me that it would be an extremely difficult situation for the positively polarized entity and the learning process would be extremely traumatic. Is this correct?

Ra: I am Ra. Let us say that the positively polarized individual makes a poor student of the love of self and thus spends much more time, if you will, than those native to that pattern of vibrations.

Questioner: I am assuming that this displacement must be a function of his free will in some way. Is this correct?

Ra: I am Ra. This is absolutely correct.

Could you explain the higher self’s position with respect to positive and negative time/space and why it is so reluctant to enter negative time/space that it is necessary for the mind/body/spirit complex to incarnate in negative space/time to find its path back?

Ra: I am Ra. In brief, you have answered your own query.

Questioner: Why is the higher self reluctant to enter negative time/space?

Ra: I am Ra. The higher self is reluctant to allow its mind/body/spirit complex to enter negative time/space for the same basic reason an entity of your societal complex would be reluctant to enter a prison.

Questioner: What I am trying to understand here is more about the higher self and its relationship with the mind/body/spirit complex.

The higher self is the entity of mid-sixth-density which, turning back, offers this service to its self.

The way I see it right now is that I am existing in two different locations, here and in mid-sixth-density, simultaneously. Is this correct?

Questioner: Oh yes. Sorry about that.

It slipped my mind.

Questioner: I think that to clear up this point I will ask a few questions that are related that will possibly help me to understand this better because I am really confused about this and I think it is a very important point in understanding the creation and the Creator in general, you might say.

If a Wanderer of fourth, fifth, or sixth-density dies from this third-density state in which we presently find ourselves, does he then find himself in the thirddensity time/space after death?

Ra: I am Ra. This will depend upon the plan which has been approved by the Council of Nine.

If the agreed-upon mission is completed the Wanderer’s mind/body/spirit complex will go to the home vibration.

Questioner: Have there been any Wanderers on this planet for the past 50,000 years now?

Questioner: Now here is the point of my confusion.

If, after physical death, a Wanderer would return to his home planet why cannot the same entity be extracted from negative time/space to the home planet rather than incarnating in negative space/time?

Ra: I am Ra. As we stated, the position in negative time/space, of which we previously were speaking, is that position which is preincarnative.

After the death of the physical complex in yellow-ray activation the mind/body/spirit complex moves to a far different portion of time/space in which the indigo body will allow much healing and review to take place before any movement is made towards another incarnative experience.

I perceive a basic miscalculation upon your part in that time/space is no more homogenous than space/time.

It is as complex and complete a system of illusions, dances, and pattern as is space/time and has as structured a system of what you may call natural laws.

Questioner: I was asking these questions primarily to understand or to build a base for an attempt to get a little bit of enlightenment on the way that time/space and space/time are related to the evolution of the mind/body/spirit complex so that I could better understand the techniques of evolution.

For instance, you stated “the potential difference may be released and polarity changed after an entity has learned/taught the lessons of love of self”

if the entity is a positive entity that has found itself in negative time/space and has had to incarnate into negative space/time.

What I was trying to do was build a base for an attempt to get a slight understanding of what you meant by this statement that potential difference may be released and polarity changed after the above step.

I am very interested in knowing, if placed in a negative time/space, why it is necessary to incarnate in negative space/time and learn/teach love of self and develop—I guess—a sixth-density level of polarity before you can release that potential difference.

Could you speak on that subject?

The entity which incarnates into negative space/time will not find it possible to maintain any significant positive polarity as negativity, when pure, is a type of gravity well, shall we say, pulling all into it.

Thus the entity, while remembering its learned and preferred polarity, must needs make use of the catalyst given and recapitulate the lessons of service to self in order to build up enough polarity in order to cause the potential to occur for reversal.

There is much in this line of questioning which is somewhat muddled.

May we, at this point allow the questioner to rephrase the question or to turn the direction of query more towards that which is the heart of its concern.

Questioner: I will, at the next session, then attempt to turn more toward the heart.

I was attempting in this session to get at a point that I thought was central to the evolution of spirit but I seem to have gone awry.

It is sometimes very, very difficult for me to question wisely in these areas.

I will just ask if there is anything that we can do to enhance the contact or to make the instrument more comfortable?

Ra: I am Ra. You are most conscientious and the alignments are especially good.

We thank you, my friends, and have been glad to speak with you.

We are attempting to be of the greatest aid to you by taking care not to deplete this instrument.

Thus although a reserve remains we will attempt from this working onward to keep this reserve, for this instrument has arranged its subconscious to accept this configuration.

You are all doing well, my friends.

We leave you in the love and in the light of the one infinite Creator.

Go forth, therefore, rejoicing and glorying in the power and in the peace of the one infinite Creator.

Last modified on Sunday, 08 April 2018 01:34
Tweet
More in this category: Definition of Unmanifested Being/Entity: Its Journey Through Time/Space and Space/Time Continuum »
Login to post comments
back to top