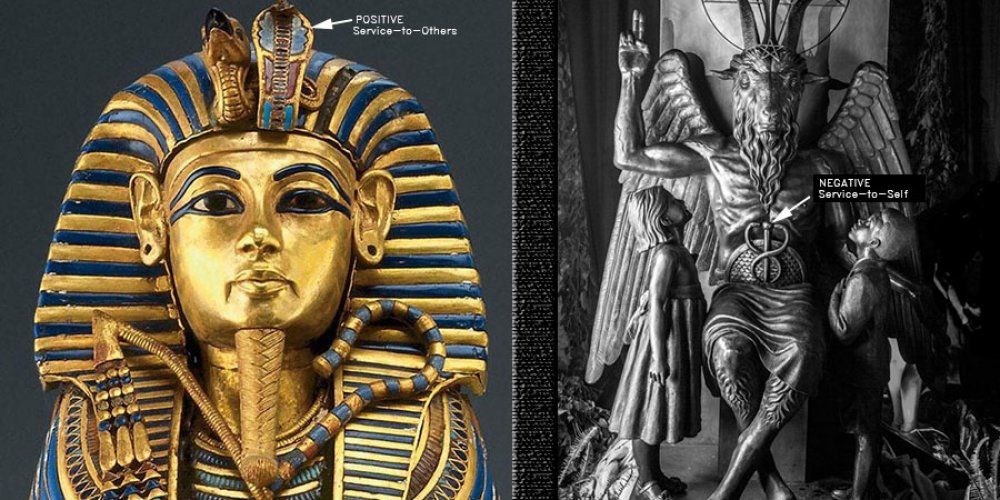 Questioner: I’m at a loss to know the significance of the serpents that adorn the head of the entity on this drawing.

Are they of Ra and, if so, what do they stand for?

Ra: I am Ra. They are cultural in nature.

In the culture to which these images were given the serpent was the symbol of wisdom.

Indeed, to the general user of these images perhaps the most accurate connotation of this portion of the concept complexes might be the realization that the serpent is that which is powerful magically.

In the positive sense
this means that the serpent will appear at the indigo-ray site upon the body of the image figures.

When a negative connotation is intended
one may find the serpent at the solar plexus center.

Questioner: Is there any significance to the serpent?

Is there any polarity to the serpent as we experience it in this illusion?

Ra: I am Ra. We assume that you question the serpent as used in these images rather than the second-density life form which is a portion of your experience.

There is a significance to the serpent form in a culture which coexists with your own but which is not your own; that is, the serpent is symbol of that which some call the kundalini and which we have discussed in previous material.

Questioner: Since our fifth-density companion has been monitoring our communication with Ra it has been made aware of the veiling process of which we have been speaking.

It seems to me that conscious knowledge and acceptance of the fact that this veiling process was used for the purpose for which it was used would make it difficult to maintain high negative polarization.

Could you clear up my thinking on that, please?

Ra: I am Ra. We are unsure as to our success in realigning your modes of mentation.

The polarization process, as it enters fourth density, is one which occurs with full knowledge of the veiling process which has taken place in third density.

This veiling process is that which is a portion of the third-density experience.

The knowledge and memory of the outcome of this and all portions of the third-density experience informs the higher-density polarized entity.

It, however, does not influence the choice which has been made and which is the basis for further work past third density in polarization.

Those which have chosen the service-to-others [service-to-self5] path have simply used the veiling process in order to potentiate that which is not.

This is an entirely acceptable method of self-knowledge of and by the Creator.

Questioner: You just stated that those who are on the service-to-others path use the veiling process to potentiate that which is not.

I believe that I am correct in repeating what you said.

Questioner: Then the service-to-others path has potentiated that which is not.

Could you expand that a little bit so that I could understand it a little better?

Ra: I am Ra. If you see the energy centers in their various colors completing the spectrum you may see that the service-to-others(self) choice is one which denies the very center of the spectrum; that being universal love.

Therefore, all that is built upon the penetration of the light of harvestable quality by such entities is based upon an omission.

This omission shall manifest in fourth density as the love of self; that is, the fullest expression of the orange and yellow energy centers which then are used to potentiate communication and adepthood.

When fifth-density refinement has been achieved
that which is not is carried further, the wisdom density being explored by entities which have no compassion, no universal love.

They experience that which they wish by free choice, being of the earnest opinion that green-ray energy is folly.

That which is not
may be seen as a self-imposed darkness in which harmony is turned into an eternal disharmony.

5 Ra corrects this error in the next two answers.

Questioner: I believe that there were salient errors in the communication that we just completed because of transmission difficulties.

Are you aware of these errors?

Ra: I am Ra. We are unaware of errors although this instrument is experiencing flares of pain, as you call this distortion.

We welcome and encourage your perceptions in correcting any errors in transmission.

Questioner: I think that the statement that was made when we were speaking about the service-to-others path was incorrect.

Would you check that, please?

Ra: I am Ra. May we ask that you be apprised of our intention to have spoken of the service-to-self path as the path of that which is not.

Questioner: I am interested in the problem that we sometimes have with the transmission since the word “others” was used three times in this transmission rather than the word “self.”

Could you give me an idea of this problem which could create a discrepancy in communication?

Firstly,
we may note the clumsiness of language and our unfamiliarity with it in our native, shall we say, experience.

Secondly,
we may point out that once we have miscalled or misnumbered an event or thing, that referent is quite likely to be reused for some transmission time, as you call this measurement, due to our original error having gone undetected by ourselves.

Last modified on Tuesday, 17 December 2019 20:51
Tweet
More in this category: The Advent of 'Service-to-Self' and 'Service-to-Others' Polarities Stemming from 2nd Density »
Login to post comments
back to top